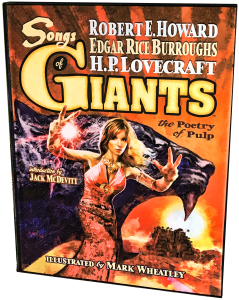 The first fully illustrated book of poetry by the giants of pulp literature, SONGS OF GIANTS, is now available to order! This signed, limited edition was offered exclusively through our Kickstarter campaign that ended in April 2019 with nearly 250% backing! Only 1000 copies were printed! If you missed out on the Kickstarter, you can order SONGS OF GIANTS though our STORE as long as copies are available.

It was a wild time in publishing in the early part of the 20th century. The Pulps produced three particularly impressive authors; Robert E. Howard, Edgar Rice Burroughs, and H. P. Lovecraft. The names of these legendary authors have echoed down through the years, inspiring many more creators. One such creator is the award winning and Hall of Fame illustrator, Mark Wheatley.

SONGS OF GIANTS! A book of poetry resurrected from crumbling old pulp magazines by an exceptional illustrator with an intense love for the look, feel and language of the pulps. Each poem is a song of beauty, horror, and adventure! Discover all the romance, the secret fears, and take journeys through an unknown and surprising cosmos. All this and more awaits you in poems written by Robert E. Howard, Edgar Rice Burroughs, and H. P. Lovecraft. And each poem has been lovingly illustrated, capturing the essence of words that were set down as long as a century ago.  Mark Wheatley has brought these poems to life with a fine line illustration style that is clearly inspired by the early, classic, golden age illustrators.

Working on his originals at a very large size, with a traditional brush, pen and ink approach, Mark Wheatley has invested over a year of his time into the creation of these elaborate illustrations, spending many, many hours living with these poems. And he has illustrated them in such a way that you will find yourself also spending long hours and days enjoying the worlds and characters visualized in these images and poems. Indeed, no one will be able to resist the sound and rhythm and beat of the drumming words to be found in these sensational poems.

You see, these poems are the SONGS OF GIANTS and they will inspire your own imagination. And this should be no surprise, because these SONGS OF GIANTS truly inspired an artist at the peak of his abilities, Mark Wheatley.

As if all that were not enough, SONGS OF GIANTS is also fortunate to feature an insightful introduction by Nebula award-winning Jack McDevitt.

SONGS OF GIANTS is a collection of some of the very best poetry written by three giants of pulp literature; Robert E. Howard, Edgar Rice Burroughs and H. P. Lovecraft. Each of these authors is known for the incredible range of their visual imaginations. Worlds and characters came to colorful life in every one of their stories and poems, lingering in the wild imaginations of illustrators and readers alike. There is a long tradition of lovely illustrated books. Often these books are largely text with just a smattering of beautiful illustrations. SONGS OF GIANTS is a feast for the eyes with illustrations covering every page and featuring artfully placed text.

And there is more! Acclaimed voice actor, Mark Redfield, has recorded an audio version of SONGS OF GIANTS! Each poem has been scored with a music soundtrack by Jennifer Rouse. And Mark Wheatley has recorded a music video of Robert E. Howard’s “Surrender.”

Robert Ervin Howard (January 22, 1906 – June 11, 1936) is the creator of Conan the Barbarian, Kull the Conqueror and Solomon Kane, as well as a large and diverse cast of other memorable characters. In his short life, he managed to capture the imagination of a large number of pulp readers. Many of his works were not published until after his death and while Conan was popular during his lifetime, it was not until thirty years after his passing that Conan began to penetrate the mainstream as a staple of books, comics, films, television and games. He is credited as being the founder of sword and sorcery as a distinct fantasy genre.

Edgar Rice Burroughs (September 1, 1875 – March 19, 1950) is best known as the creator of Tarzan of the Apes, and the world of Barsoom; home to the heroic John Carter. He was a prolific author who turned out quite a few ongoing series that included stories of adventure, science fiction, horror, and westerns. His works have inspired generations of authors, artists, actors, filmmakers and game designers.

Howard Phillips Lovecraft (August 20, 1890 – March 15, 1937) achieved a limited fame during his lifetime, writing richly inventive tales of horror for the pulp magazines. After his death his work continued to attract attention, partially due to his encouragement of other authors to set their own stories in the universe of monsters and gods that he had created. The Cthulhu Mythos has grown with each passing year and sent readers searching out his original works. As a result, his stories continue to be adapted for radio, television, film, graphic novels and games. In this way he has become one of the most influential authors of horror and weird fiction of our era.

Jack McDevitt (author of the introduction to SONGS OF GIANTS) is the Nebula Award-winning author of the Academy series and the Alex Benedict series. He went to La Salle University, then joined the navy, drove a cab, became an English teacher, took a customs inspector’s job on the northern border, and didn’t write another word for a quarter century. In 1971 he received a master’s degree in literature from Wesleyan University, and in 1980 he returned to writing when his wife, Maureen, encouraged him to try his hand at it again. Along with winning the Nebula Award in 2006, he has also been nominated for a Hugo Award, the Arthur C. Clarke Award, and the Philip K Dick Award. In 2015 he was awarded the Robert A. Heinlein Award for Lifetime Achievement. He and his wife live near Brunswick, Georgia. You can visit him at JackMcDevitt.com

Mark Wheatley – holder of the Eisner, Inkpot, Mucker, Gem and Speakeasy awards and nominations for the Harvey award and the Ignatz award. He is also an inductee to the Overstreet Hall of Fame. His work has often been included in the annual Spectrum selection of fantastic art and has appeared in private gallery shows, The Norman Rockwell Museum, Toledo Museum of Art, Huntington Art Museum, Fitchburg Art Museum, James A. Michener Art Museum and the Library of Congress where several of his originals are in the LoC permanent collection. He has designed for Lady Gaga, created set pieces for The Black Eyed Peas, contributed designs for ABC’s Beauty and the Beast, and Square Roots, as well as Super Clyde, The Millers and 2 Broke Girls on CBS. Several of his original graphic novels have been optioned for motion pictures with Blood of the Innocent currently in pre‑production.

Even though the SONGS OF GIANTS Kickstarter is over, you can still visit the campaign and see what you missed. The page is here: Kickstarter